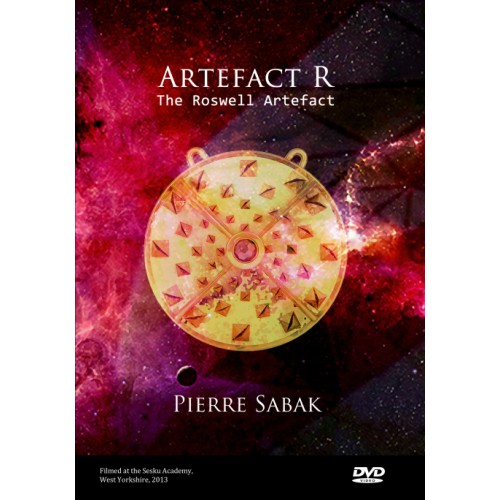 In this world exclusive lecture, the researcher Pierre Sabak reveals for the first time a classified object purportedly retrieved from a crashed Flying Saucer in Roswell, New Mexico, 1947.

A symbologist and an expert in ancient languages, Sabak describes how he came into contact with ‘Artefact R’ and was given permission to photograph and publish the details. The incredible medallion was produced by the deceased rocket scientist Dr Fred Bell, based upon an alien artefact, and given to a fellow British scientist under the pseudonym ‘Dr Greenham’ by a member of his family (The information appertaining to Dr Bell’s significance in this case only came to light after the completion of this film).

The following DVD is as a result of nearly three years’ painstaking research. In this double-disk presentation, Pierre Sabak leaves no stone unturned and examines:

Sabak's deep research and exposé demonstrates that the Circle and Triangle is an ancient motif of the Aliens and the Illuminati.

In this detailed study, Sabak argues that there exists a conspiracy and highlights that many ufologists are unaware of the symbolic component of the UFO mystery. His controversial research indicates that Alien and Angelic visitation are one and the same phenomenon, and he carefully deconstructs the UFO question, using historical, textual and etymological proof. Never before has this data been published, the evidence from his careful analysis reveals a startling secret, one which is actually found encoded in the mathematics of ‘Artefact R’!

Sabak examines Roswell in his own unique way and the results will astound you.

This item is the perfect companion to The Murder of reality and Holographic Culture and will open your eyes to the UFO secret.